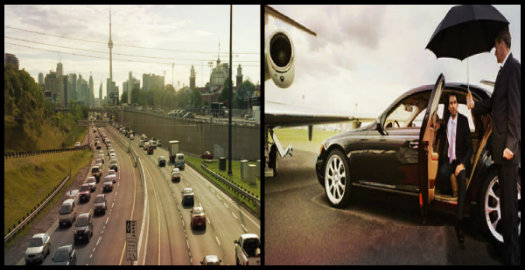 Over the years, the traffic congestion in Toronto has become noticeably worse for commuters. Whether you take public transportation or carpool with fellow colleagues, commute time can add up to an hour and a half of your day. This can pose a major problem for airline travelers who take taxis to Toronto airports during rush hour. However, the introduction of High-Occupancy Toll (HOT) lanes on the QEW may be good news for those of us trying to check-in on time.

Understanding the economic impact of traffic has been a topic of political discussion for years. In a 2014 report by the office of Deputy Mayor, Norm Kelly, the City of Toronto was home to 85,000 businesses. In one day, these businesses could reach up to 150 million people. If you factor in the last two years of growth and development, it is no wonder why this City is bustling with traffic. The report explains that a consequence of gridlock is a “human resource challenge for employers”. For every employee late, time becomes inefficient. To ensure goods and people move efficiently throughout the business day, the idea of HOT lanes has recently been considered.

In September of 2016, the Ministry of Transportation began the first step in a new pilot study to offset Toronto traffic. By converting the existing High-Occupancy Vehicle (HOV) lanes into HOT lanes, the government aims to not only help commuters, but to also create a more efficient economy. This pilot study has implemented HOT lanes across a 16.5-kilometre section of the QEW between Trafalger Road and Guelph Line. The Ministry has outlined three major benefits, which include:

In terms of total cost, the Ministry will charge a onetime fee of $180, which can be broken into monthly payments of $60. Each permit is valid for a period of three months and permit holders can automatically renew.

What does this mean for travelers?

Tolls are placed on vehicles with single occupants. If your vehicle carries 2 passengers or more, you are given free access. This includes cars, vans, trucks, motorcycles, and even commercial trucks.

Airline travelers may be concerned with how HOT lanes will affect Toronto airport taxi services. The answer is positive. Licensed taxis and airport limousines have unrestricted access to HOT lanes. So, while the traffic may continue, airline travelers are in the right lane.

The City of Toronto is still warming up to this paid toll phenomenon. Reservations have usually been linked to Torontonians not wanting to pay additional income tax. However, in an article written by David Gladstone, of the Toronto Star, a poll found that 70% of respondents support the tolls. Even if the majority vote is to keep the tolls, airline travelers have a good seat when it comes to rush hour commutes.